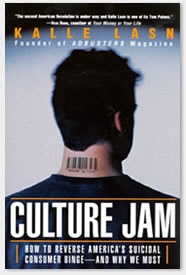 The Author
Kalle Lasn is the founder of Adbusters Media Corporation and Adbusters magazine. Lasn, who lives in Vancouver, Canada, has helped launch campaigns such as Buy Nothing Day and TV Turnoff Week to raise public awareness about the power corporations and media hold in the Western world.

The Book
Culture Jam is a manifesto that pleads with Americans and residents of other First World countries to reexamine their assumptions about consumerism, capitalism and consumption. From the fashion industry and fast food to tobacco executive and logging empires, Lasn breaks down the assumptions readers may have about the power of companies and the rights of individuals.

Lasn says a corporate environment where messages are tightly controlled by a handful of people can lead to a lack of diversity and of true dialogue.

The Reaction
A book by a man with a passion will obviously lean at times toward extremes and hyperbole to make a point. But I found Culture Jam to have a more solid foundation than previous books we have read that primarily advocate protests to raise public awareness. While a protest can be successful, Lasn said, a group must first know what they stand for and must be able to reframe the topic (page 152). By doing this, one connects with the public and challenges their expectations. The story becomes one of individuals with a real point, not zealots searching for the next cause to embrace.

Lasn showed that many heavy issues need to change in our society for future health, but he didn’t stop there. He provided a “how” along with the “why.” Lasn believes change is actually possible, and that vision is both challenging and motivating.

While it is clear from small statements inside the books pages that Lasn does not believe in Christ’s message (“When I showed them a picture of Jesus Christ on the Cross [they said] “This cannot be a god … He looks too much like a loser to be a god.” p. 199), many of his goals and tactics connect with Christian values. He dreams is of a life again filled with community and real connection. He wants people to wake up from the context of a lifeless existence and live out a life of purpose and meaning. In the Gospels, Christ calls for the same things. Christians are called to be countercultural and to stand up against injustice.

Lasn’s theory of working from the top and the bottom simultaneously (the “pincer”, page 134) is a healthy framework of action for churches. We must engage the infrastructures of society, not content to just watch over the religious domain. We must also serve from the bottom up, blessing our neighbor and serving the least.

Much has changed since this book was published seven years ago. Tobacco rulings have been made, fast food quality is at the tip of the American consciousness, and the public’s placid acceptance of corporate dealings was stirred by Enron and company.

If nothing else, this proves Lasn’s point. His strategies work, and things can change. But comfort is a difficult thing to give up, and some comfort must be sacrificed for sweeping changes to take place.