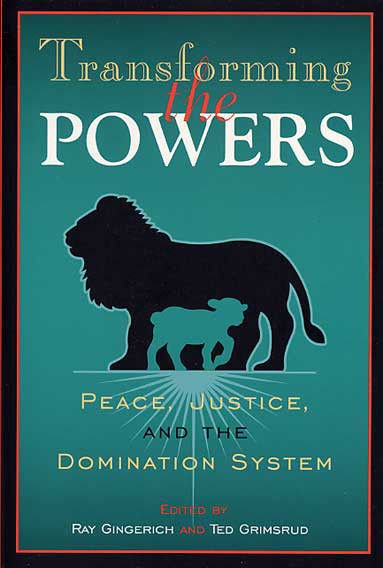 The Authors
Transforming the Powers was edited by Ray Gingerich and Ted Grimsrud. Contributors to the book were Gingerich and Grimsrud, as well as Walter Wink, Nancey Murphy, Daniel Liechty, Willard M. Swartley and Glen Stassen. The contributors are all professors of topics including theology, social work, Christian ethics and philosophy at universities and seminaries across the United States.

The Book
Transforming the Powers is a collection of essays based on the writings of Walter Wink, including his “powers trilogy”: Naming the Powers: The Language of Power in the New Testament; Unmasking the Powers: The Invisible Forces That Determine Human Existence; and Engaging the Powers: Discernment and Resistance in a World of Domination. Wink’s thesis centers around the Biblical idea of “Principalities and Powers.” In short, “The Powers are good. The Powers are fallen. The Powers must be redeemed.” (2) Governments, businesses, universities and other institutions must be understood in light of these truths, Wink says.

Transforming the Powers takes Wink’s ideas and opens the floor for other scholars to comment and expand the discussion. It is divided into three parts: Worldviews and the Powers; Understanding the Powers; and Engaging the Powers. The first section does an excellent job laying out the ideas behind the Powers and how people’s worldviews affect their interaction with society. Throughout the book, much of the discussion centers on pacifism, nonviolence and nonresistance.

The Reaction
There are a number of brain-stretching ideas worth grappling with inside this collection of essays, including Wink’s idea of a new worldview and Liechty’s discussion on how a necessary “simplifying of evil” in a person’s mind can eventually lead to one justifying unjust actions.

It was interesting to read some more academic views on Christianity, especially Murphy’s view that the hierarchy of the sciences is not complete without ethics and theology. This more integrated worldview is unique and not something I have been exposed to often. As many of the writers mention, most people either embrace science and ignore theology or embrace theology and ignore science. It is intriguing to hear what discussions emerge when the two systems converge.

Unfortunately, the third section on engaging the Powers is the shortest section in the book. While many of the scholars analyze past actions to understand the affects of passivity and nonviolence, it would be helpful to hear from practitioners who are working to live out these values on large and small scales within today’s society. The challenge we must constantly keep before us is one of application. Once we understand the nature of the powers, what will we do with it? Much of the writers’ points seem to center on government actions and protests to change these governments’ actions. We can encourage the government to act, but we must also understand that the Powers, while redeemable, are also fallen.

I would like to see more discussion on how individuals and church bodies can respond to this scriptural understanding of the Powers, God’s value for justice, and serving the least. Glen Stassen touches on this idea on page 140 when he says that when groups adopted Jesus’ practices, they became distinctive within their local communities. As individuals and groups use their resources for good, governments will begin to take notice.